The southern European marshland pyralid or European pepper moth (Duponchelia fovealis) is a polyphagous species feeding on a wide range of hosts from 38 plant families. They include ornamental crop plants, such as roses and gerbera, aquatic plants, vegetable crops such as celery, pepper and lettuce, and weeds. The secretive habit of the caterpillars of this species makes them very difficult to control with synthetic pesticides.

Adults of the European pepper moth (Duponchelia fovealis) are light to dark brown with a clearly visible white crinkled line on the forewing. The end of the remarkably long abdomen bends upward almost vertically, with the abdomen of males often being longer than that of females. Another distinctive feature is the triangle formed by the head and forewings. Moths mainly fly at night, but can sometimes be seen in the daytime.

Eggs are laid singly or in groups of 5 to 10 eggs, overlapping in a tile-like fashion on both the upper and lower surface of leaves close to the veins, or low on the stem or stalk close to the ground. The pinkish red eggs are about 0.5 mm in diameter and become steadily darker. Just before hatching, which occurs about a week later, the young larva is visible within the egg. The full-grown caterpillars are 20 to 30 mm long and have a creamy white colour. Along the dorsal surface of the body there are pairs of dark dots. The dark head is also conspicuous, as are the four dark dots behind the head capsule. There are 4 pairs of prolegs.

Caterpillars are found in webs, preferably in damp, humid places and are thus mainly found low in the crop, often in decaying organic material on the ground or substrate. They feed on detritus as well as life materials. Young larvae feed on the leaves and flowers before they bore and burrow into the stem to emerge at ground level. The caterpillars pupate in an earthen cocoon, concealed either within the crop or in another suitable spot in the vicinity. Pupation occurs in a cocoon made of webbing, frass and soil particles. The pupa itself is yellow-brown, becoming darker as the adult gets closer to emergence, and measures 9 to 12 mm.

The caterpillars often stay in the lower strata of the crop, sometimes attacking the stem of the plant as well as the leaves. Late instar larvae burrow into soft woody or herbaceous plant stems causing withering or drying of crowns and possibly stem collapse. The holes bored into the stem can facilitate infection by the fungus Botrytis cinerea. In gerbera, the flower buds may also be eaten. It has even been known for the caterpillars to inflict damage to the roots of crops cultivated in an ebb-and-flow irrigation system. The damage threshold varies considerably according to the crop: in begonia and kalanchoë a relatively small population can cause severe damage, whereas roses appear to tolerate larger numbers. 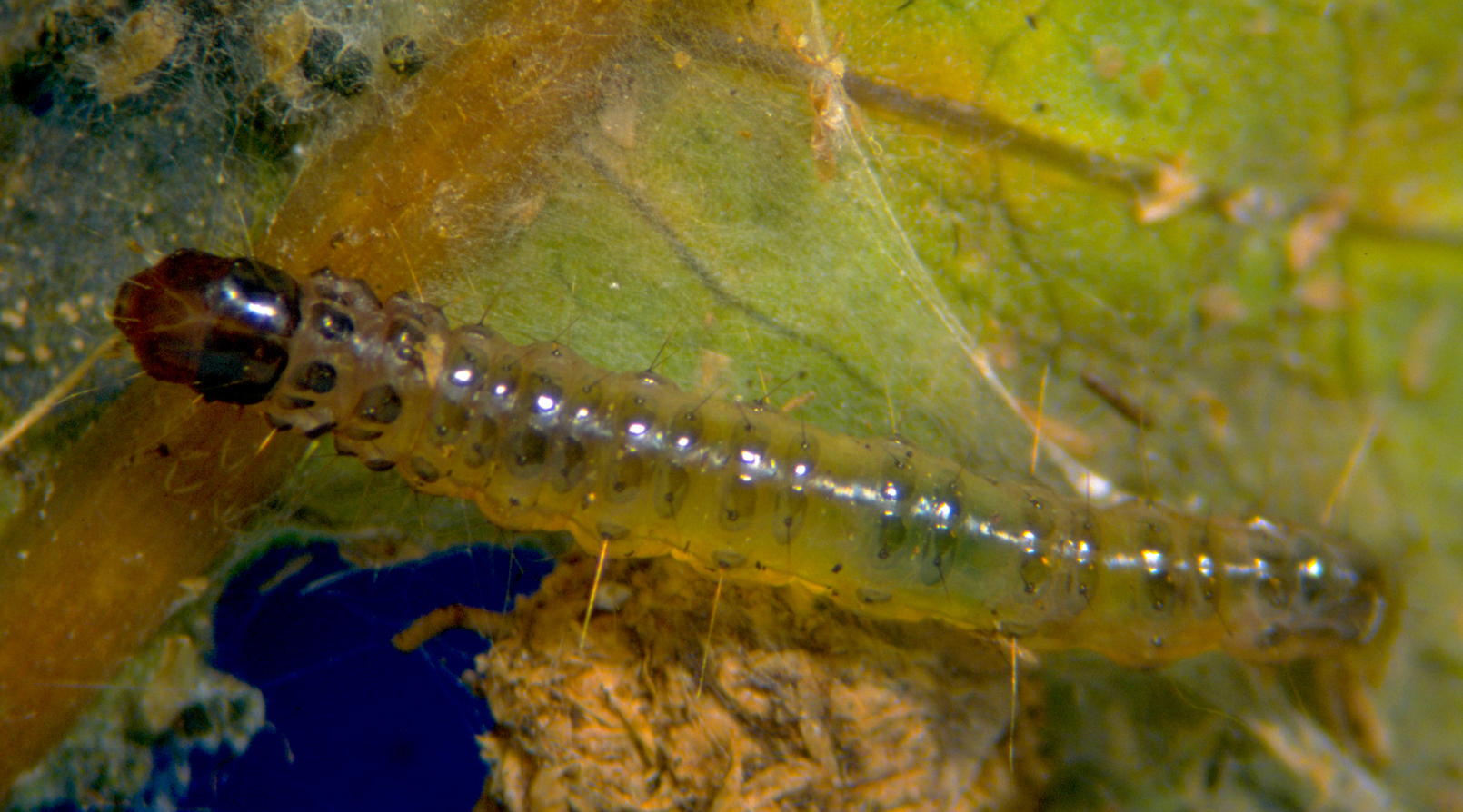 How to get rid of Southern European marshland pyralid