The Japanese beetle, Popillia japonica, originates from north-eastern Asia. It was first observed in the US more than 100 years ago. Although not a pest in Japan, extensive turf, and a lack of natural enemies, allowed populations to rapidly build up and spread steadily in the US. In Europe, Popillia japonica was for the first time reported in northern Italy in 2014 where official control actions were taken to prevent further spread. The Japanese beetle is on the A2 list of the European Plant Protection Organization (EPPO). To prevent its further spread in Europe, occurrences outside the known area in Italy need to be reported to the National Plant Protection Authorities.

Newly-laid eggs of the Japanese beetle are about 1.5 mm long, pearly white and oblong. They absorb water from the soil, becoming spherical and nearly doubling in size within a week. The developing embryo can be seen within the eggs that are close to hatching.

Popillia japonica larvae are typical scarabaeid grubs. The head is yellowish-brown, with strong, dark-coloured mandibles. The grubs assume a typical C-shaped position in the soil.

Newly-hatched grubs are about 1.5 mm long and translucent white. There are three instars. First and second instars reach a length of approximately 11 and 19 mm, respectively, whereas the mature, third instar, averages 32 mm.

When mature, the grubs stop feeding and develop into pale, somewhat shrunken prepupae. The transformation to prepupa and pupa, occurs in an earthen cell formed by the mature larva. The pupa, which is approximately 14 mm long and 7 mm wide, resembles the adult beetle, except the wings and other appendages are closely folded to the body. It is a pale-cream colour at first, gradually becoming tan and finally taking on the metallic green of the adult.

The adult is an attractive, broadly oval beetle, 8-11 mm long, and about 5-7 mm wide. Females are usually slightly bigger than males. The head and body are dark, metallic green, with darker copper-green legs.

Larvae (mainly third-instar) overwinter in an earthen cell about 15-20 cm deep in the soil. In early spring, when the soil temperatures increase, the grubs move closer to the surface and resume feeding on plant roots at 2.5 to 5.0 cm depth. Pupation usually occurs after 4-6 weeks of feeding, and the adults emerge from mid-May to mid-July, depending on latitude.

Mating takes place soon after emergence, and egg-laying soon follows. The average lifespan of a female is 30-45 days, during which she may lay 40-60 eggs. Eggs hatch in about 2 weeks, and the young larvae begin feeding on fine roots and organic matter. They moult and become second-instars after 2-3 weeks, and third-instars after another 3-4 weeks. Feeding continues until late autumn, when the grubs move deeper into the soil in response to declining soil temperatures.

Skeletonized foliage is the most common symptom of feeding by the adult. The beetles generally feed from the upper surface of leaves, chewing out the tissue between the veins and leaving a lacelike skeleton. Severely damaged leaves soon turn brown and drop. The adults are gregarious, usually beginning to feed on foliage at the top of a plant and working downwards.

The larvae are most abundant in well-kept lawns and golf courses, and less often in pastures. The grub feeds just below the surface, it cuts off and consumes the grass roots. Early symptoms include thinning, yellowing, and wilting, culminating in large patches of dead, brown grass that appears in late summer or early autumn. Secondary damage from mammals and birds digging for grubs can cause more disruption to the sward than the grubs themselves. Feeding by grubs on roots of maize, beans, tomatoes, strawberries, nursery seedlings, or other crops reduces their vitality and yield and sometimes kills the plants. 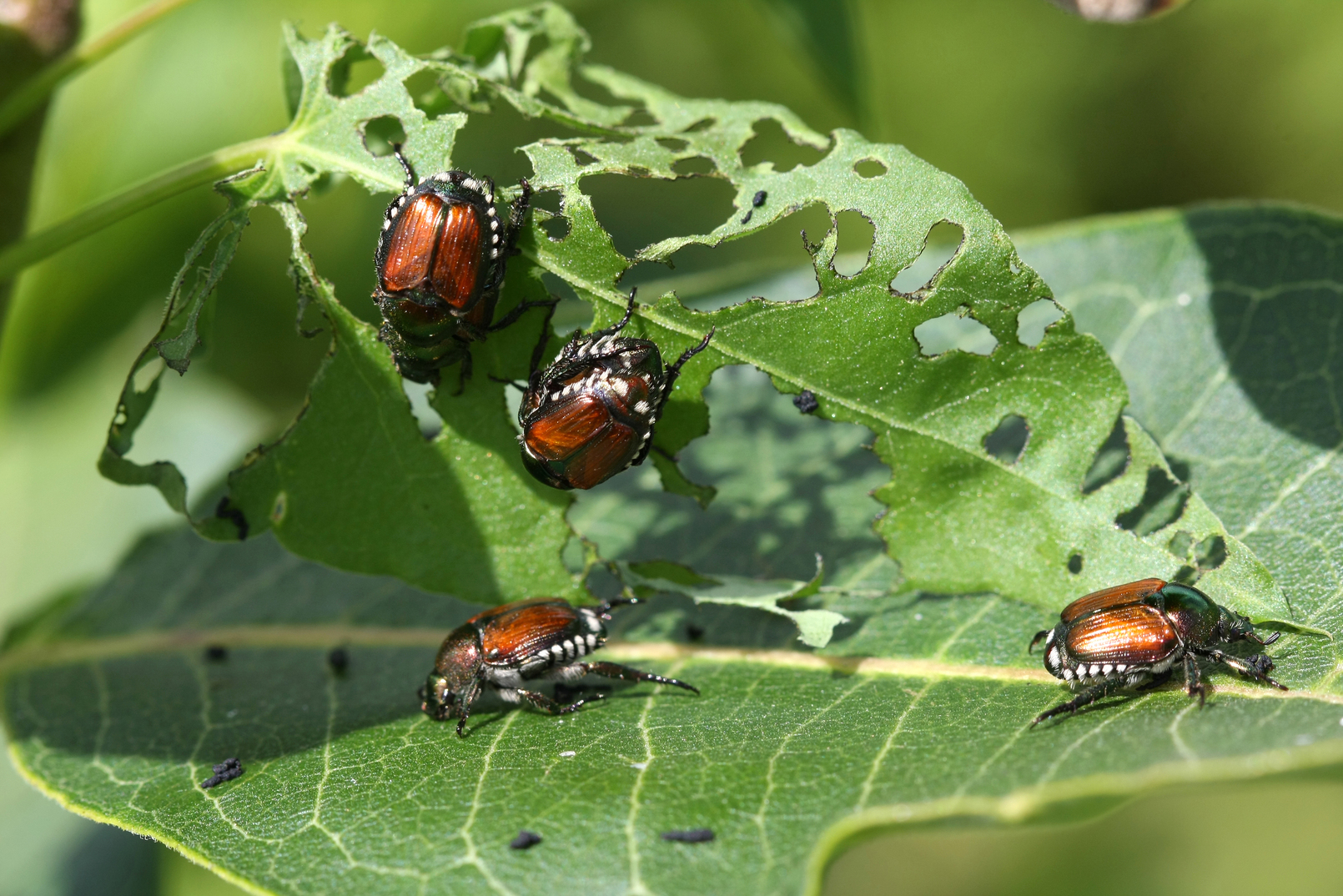