Pollination over the last decade has become more of a concern for fruit crop growers due to a decrease in pollinators from pesticide use, monocropping and Colony Collapse Disorder.  In particular Colony Collapse disorder has had a wide-reaching impact on availability of honey bee colonies across Canada and increasingly growers are turning to commercially lab reared bumblebee hives to fill this gap in their pollination needs.

Koppert is the largest producer in the world of bumblebee colonies with over two decades of experience delivering Bombus impatiens sp. to outdoor fruit growers in; Quebec, New Brunswick, Nova Scotia, PEI and Ontario.  In 2021 with the addition of a Western species bumblebee (Bombus vosnesenskii) to our product line we are proud to have started delivering to British Columbia fruit growers as well.  Bumblebees are a pollinator that co-evolved with native Canadian fruit such as Blueberries and Cranberries, while honeybees are imported species primarily from Europe.  Due to this, bumblebees are much more adapted than honeybees to pollinating these crops in the cooler, wetter conditions that frequently occur in Canada. 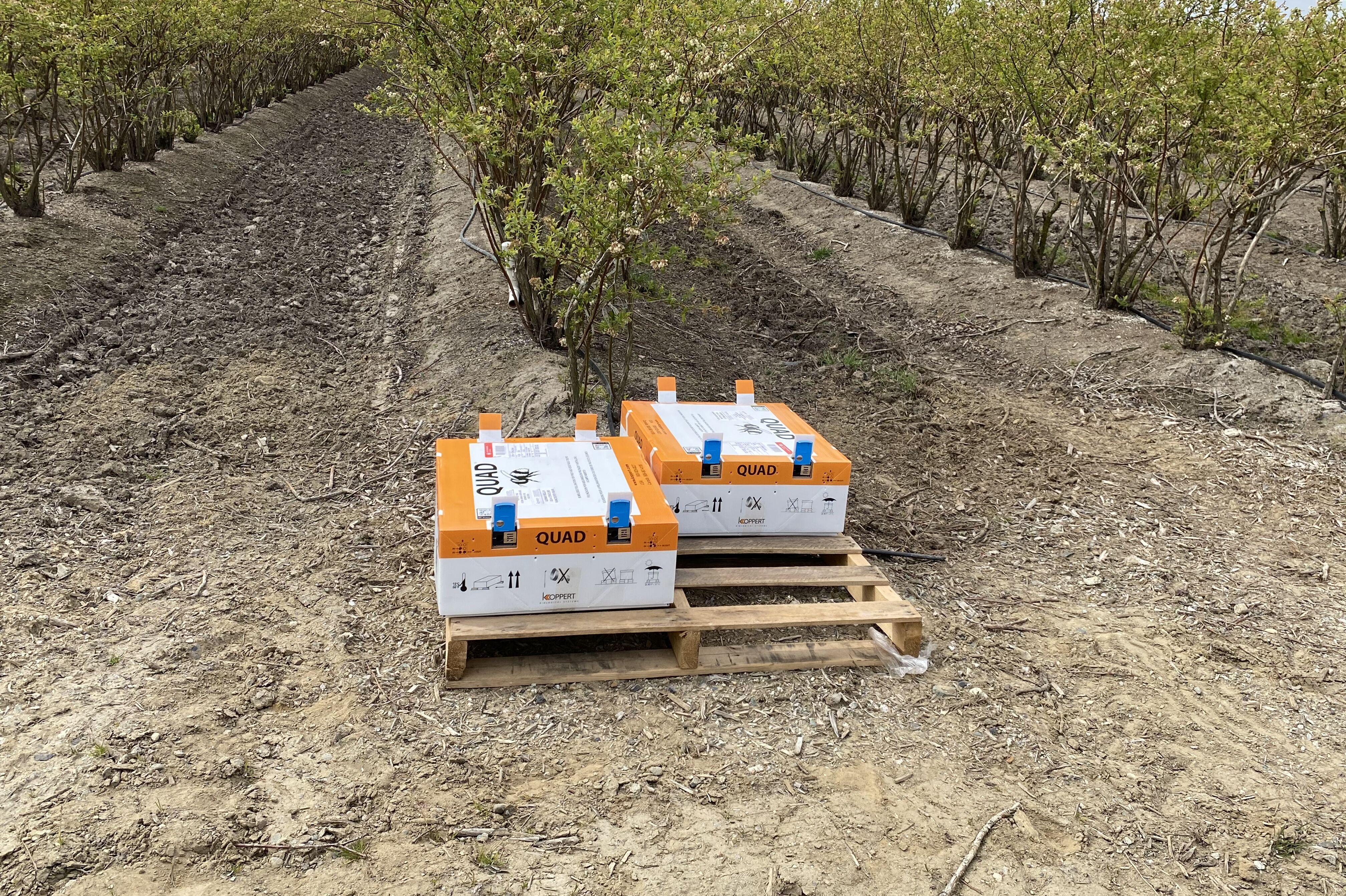 To ensure a high fruit yield, it is important to note that some fruit crops may need to be pollinated via cross-pollination when varieties do not set fruit by their own pollen. Cross pollination only works if the cultivars are compatible. Other fruit crops may be self-fertile, however due to their flower structure, wind pollination is still not entirely sufficient. It has been shown that self-fertile plants without pollinators have a yield decrease of at least 10% and that introducing additional hives to the crop can increase crop yield 2-4X that of a self-fertilized plant. We included a brief overview of the pollination mechanisms of each of Canada’s primary pollinator dependent fruit crops below:

Blueberries both Lowbush (wild) and Highbush types are self-pollinating but pollinators increase fruit weight due to increased pollen deposit from bee’s, they also get an additional yield boost from cross pollination between different cultivars.

Bumblebees work synergistically with honeybees adding an extra layer of pollination support for the crop. They carry a larger amount of pollen on their bodies than honeybees, due to having a bigger physique and higher amount of hair which allows them to transfer higher deposits of pollen to flowers, maximizing fruit size and uniformity. Bumblebees will also on average visit twice as many flowers per minute than honeybees, having direct contact with the stigma and visit flowers for a longer duration – 8 seconds compared to 2-3 seconds by the honeybees. They will fly at lower temperatures (8C), in worse weather (clouds/wind/rain), and work more hours per day because of this.

Bumblebees also pollinate via buzz pollination (sonication) something honeybees are unable to do. They do this by vibrating the flowers by rapidly moving their flight muscles without using their wings, this vibration releases pollen firmly held by the anthers maximizing the amount collected by the bee each visit to carry on to other flowers. Well pollinated crops ripen earlier, produce larger and higher amounts of fruit, improving grower profit. 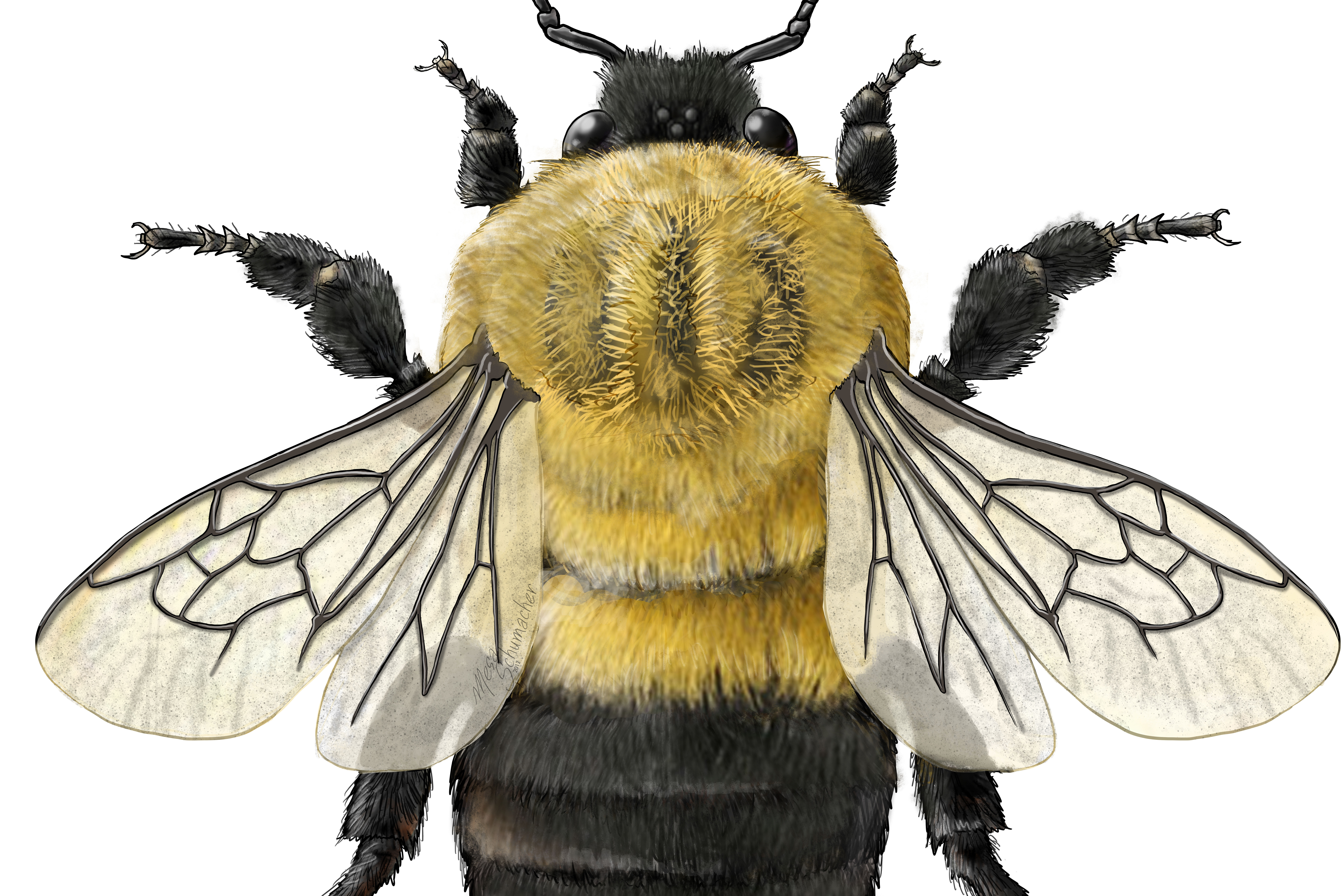 Bumblebee Quads work well in combination with honeybee hives, provided they are separated by a minimum of 100 yards, otherwise the honeybees rob their hives of reserves. Stocking rates depend on the bloom density which can vary considerably depending on age of crop and cultivar but typically range between one Quad per 1-2.5 acres.  Provided there is a readily available source of pollen in your field bumblebees won’t drift to neighbouring fields the way honeybees do.  Overall, it has been observed that the best option for a grower is to use both honeybees and bumblebee hives together in the same field. Honeybees for their mass numbers and bumblebees to maximize pollination in adverse weather conditions. 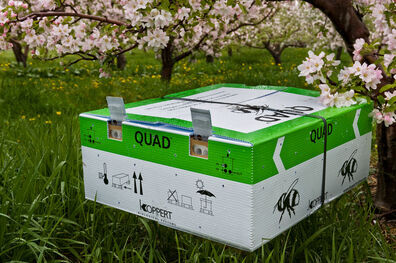 Each Koppert Quad contains four lab reared bumblebee colonies specifically designed for outdoor pollination of fruit crops. We guarantee Quad delivery provided we are given a minimum 12-week order lead time. All Quads are independently certified to be free of pests & diseases.

For more information on the hives themselves, please click this link:  Quad | Koppert Products.